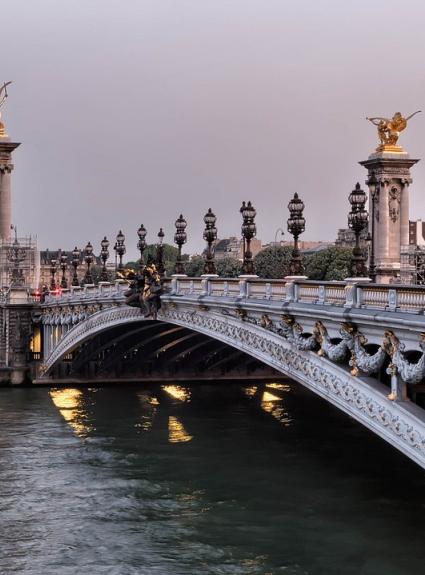 Succumb to the charms of the bridges of Paris

Paris is not only noted for its excellent museums. The capital also has no fewer than 37 bridges spanning the Seine. Crossing them gives you the opportunity to get a different perspective on the City of Light thanks to their amazing views of the river and the landmark buildings along its banks. During your stay at the Hotel des Arts, treat yourself to a journey through the history of Paris by discovering some of the capital’s remarkable bridges.

The lavishly ornate Pont Alexandre III, a deck arch bridge located between the Esplanade des Invalides and the Grand Palais is a monumental Parisian work of art. It spans the Seine with a single arch linking the 7th and 8th arrondissements and offers a panoramic view of the nearby buildings, including the Eiffel Tower.

Located between the Louvre Museum and the Institut de France, the Pont des Arts was the first iron bridge in Paris. Reserved for pedestrians only, it also serves as an open-air studio for artists and photographers who are drawn to its unique views of the Seine and its monuments.

The Pont de Bir Hakeim; a bridge on two levels

This two-level bridge was named after a French victory over the Germans in Libya during the Second World War. One level is for pedestrians and the other for motor vehicles. It crosses the Île aux Cygnes, which boasts a quarter-scale replica of the Statue of Liberty, reaching the Left Bank at the Quai Branly and the Quai de Grenelle, and overlooks the Avenue President Kennedy on the Right Bank.

The Pont Neuf; new in name only…

Built in 1578, the Pont Neuf is distinguished by its many stone arches, its cornices adorned with 381 ‘mascarons’ (grotesque stone faces), its half-moon turrets and its statue of Henri IV. The oldest bridge in Paris, it connects the Left Bank to the Right Bank at the Louvre Museum, Rue de Rivoli and the Saint-Jacques Tower.