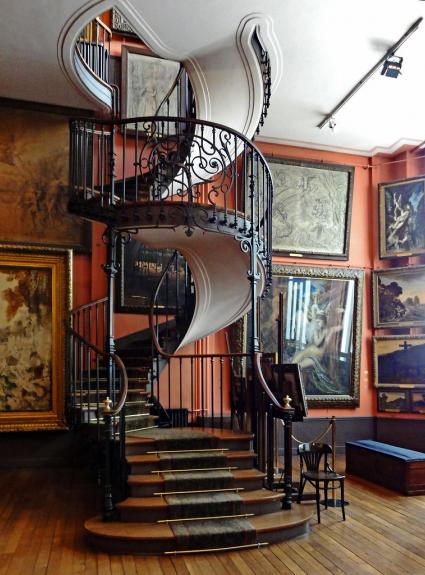 The legacy of Gustave Moreau

Let's leave Montmartre for a moment to head to the other side of the Boulevard Rochechouard where, close to the Church of the Trinity, the artist Gustave Moreau lived in the 1850s. The former home of this major French Symbolist painter now houses a museum dedicated to his life and work.

Welcome to the artist’s home

It’s always fascinating and often moving to step into the intimate world of a creative giant of yesteryear. The Gustave Moreau Museum illustrates this beautifully. This is where the painter and his parents lived, and where he installed his workshop before deciding, in 1895, to arrange for the creation of a museum that he would bequeath to the state after his passing. Today, the museum boasts a collection of nearly 25,000 works, including 15,000 by Gustave Moreau himself...

Personally planned by the artist, the Gustave Moreau Museum is particularly inviting and inspiring. The walls are full of paintings, cabinets with rotating panels display the watercolours, while the drawings are mounted on panels that open like the pages of a book. Here and there easels are set up, a nod to the original function of the place as an atelier. The former family apartments are full of poignant memories; in the room of Pauline Moreau are the desks of the mother and son as well as portraits (including a signed Degas!), photos and early works. The boudoir contains the furniture of Alexandrine Dureux, the artist’s one true love.

But who exactly was Gustave?

Gustave Moreau was born in 1826 and died in 1898. He was a leading figure of the Symbolists, focussing chiefly on biblical and mythological subject matter and having a distinctly mystical inclination.

Let's leave the last word to the writer and proponent of Surrealism, André Breton, who said that "the discovery of the Gustave Moreau Museum, when I was sixteen, conditioned forever the way I have loved."