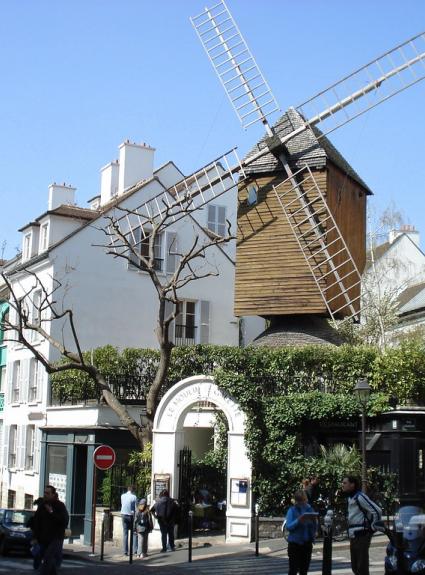 The Moulin de la Galette: a restaurant with an unknown history

If there’s one institution not to be missed during your stay at the Hôtel des Arts, it’s the famous Moulin de la Galette. But although this restaurant is renowned for attracting gourmets, relatively little is known about its history. So, here’s a little something to tantalise your taste buds and your taste for knowledge of the past.

Built in the early 17th century, the Moulin de la Galette was just one of 30 windmills that stood on the hill of Montmartre. By the 19th century, it was still being used to grind grain. The family of millers who owned the business were known for making a particularly tasty brown bread that they sold with a glass of milk or wine. The windmill became known by the name of this bread. But although its sails continued to turn, it grew increasingly unprofitable over the years and was converted into a tavern with a dance hall, and later a performance venue. The Moulin de la Galette attracted many artists, including Renoir and Toulouse-Lautrec, who made it the subject of some of their paintings.

Located at the corner of the Rue Lepic, the Moulin de la Galette is now one of the iconic restaurants of Paris and the Butte Montmartre. Its speciality is gourmet cuisine made with quality produce. Seasonal fruits and vegetables, organic wines, and fine meats and fish grace its tables. In addition to its main room, the restaurant also has upscale reception lounges commanding panoramic views across the rooftops of Paris. There is even a casino area offering blackjack and roulette. A word to the wise; don't miss the opportunity to have a meal on the terrace of the Moulin de la Galette and enjoy a delicious end to your day.